Chief Economic Advisor of India Krishnamurthy Subramanian has repeatedly stressed that investment is key to the country becoming a $5-trillion economy by 2025. Logic is simple. Investments create jobs and provide income to people. People spend this money and help other people earn income as well and so on the cycle continues. Investment spending is not only important for long term growth but it is also critical for short term business cycle. Historically as expenditure on goods and services dropped during recessions, much of the drop has been attributed to slump in investments. Global recession of 2008-09 happened because of fall in investments due to credit crunch and low bank lending.

Personal and Corporate Income Tax cut are good fiscal measures to stimulate investments. In USA, President John F Kennedy’s proposal led to substantial reduction in Personal and Corporate Income Tax in 1964. Tax cut was to encourage expenditure on consumption and investment and lead to higher level of income and employment. The tax cut was actually followed by economic recovery marked by increase in GDP of USA by 5.3% in 1964 to 6.0% in 1965 and decrease in unemployment from 5.2% in 1964 to 4.5% in 1965 to 3.8% in 1966. USA President Ronal Reagan again passed major Tax cuts in 1981 and 1986 and similar results were seen. The US real GDP was 3.5%+ in all years from 1983-1989 with marked decrease in unemployment.

The Index of Industrial Production (IIP) fell 4.3% in September 2019 as compared to a contraction by 1.4% in August 2019 mainly due to poor performance in the manufacturing sector. IIP figures are worst in almost eight years and highlight structural slowdown. Consumer Price Index (CPI) Inflation was at 3.9% in September 2019. Rupee appreciated against the dollar in September to close at 70.65 compared to 71.73 in August. Yield on 10-year government bond increased by 14 basis points from 6.56% to 6.70% in September 2019.

During September 2019, there were five public equity issues (all the issues were at SME platform) mobilizing Rs.34 Crore as compared to four public equity issues (including IPO of Sterling and Wilson Solar Limited and IPO of Spandana Sphoorty Financial Limited) mobilizing Rs.4047 crore in August 2019. There was no right issue as against one right issue for Rs.102 crore in August 2019. 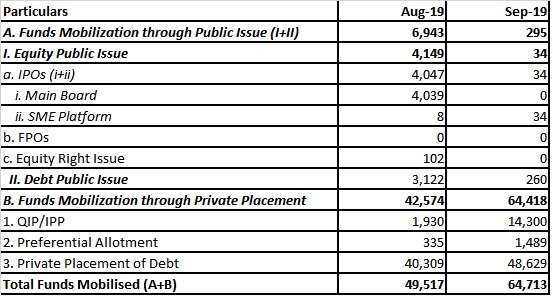 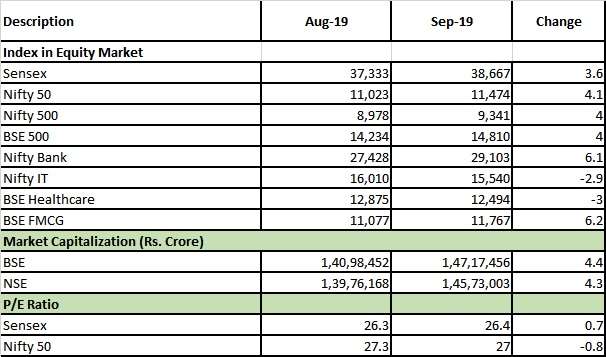 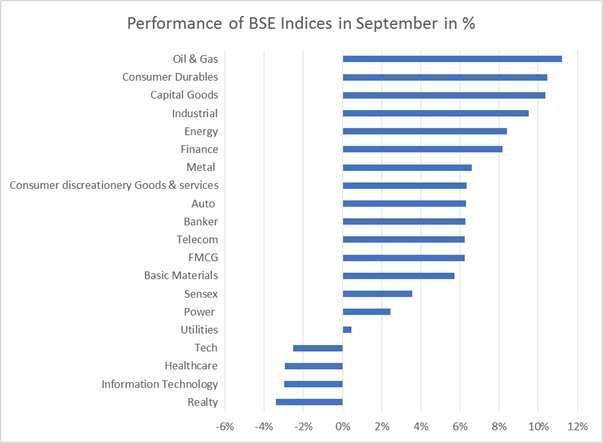 Government is considering a proposal to consolidate 10 public sector banks into 4 large ones. This reform was first suggested by Narasimham committee in 1998. 6 weaker PSU banks like Andhra Bank and Corporation bank will be absorbed by 4 anchor banks like Union Bank. The rationale is to improve operating efficiency, accountability and address problem of stressed assets. This move will also create stronger global sized lenders with robust balance sheets. However mergers are inherently time consuming exercise and create number of operational challenges in short term as evident by experience of SBI’s merger with its associate banks in 2017.

Indianbulls real estate sold remaining 50% of its Mumbai and Gurugram based commercial properties to US based fund Blackstone fund for Rs. 2700 Crore in September 2019.

Sintex group with presence in Textiles and Plastics has sold off its overseas business Sintex NP SAS to Xtech Invest SAS owned by consortium of PE investors for a consideration of €155 Million in August.

The global economic growth has softened in the 2nd quarter of 2019. According to World Bank, global growth is expected to slow to 2.6 percent in 2019, reflecting weaker-than-expected trade and investment since the start of the year. Subdued investment in emerging market and developing economies is dampening growth aspects. Major central banks across the globe changed their monetary policy stance towards accommodative, on the concerns of slower than expected global growth. US-China trade war appear to have eased as both parties intended to resume talks and delayed increase in tariffs. In political development, tensions in the Middle East surged following attacks on two major oil facilities in Saudi Arabia. This led to surge in oil price by as much as 15% to $69 and then finally subsequently settling at $56.

The stock markets indices improved in September 2019 as both developed markets as well as BRICS nations posted positive returns, except the South African Index which fell by 0.8 per cent. Amongst the developed nations, Japan recorded the highest return of 5.1 percent during September while South Korea followed with 4.8 per cent. US S&P 500 posted gains of 1.72% in the month of September.