Government presented Union Budget 2019-20 in July amidst challenging global environment and notable slowdown in GDP growth rate of India. The chief economic advisor has set the goal in economic survey to make India a 5 Trillion $ economy by 2025. Emphasis has been laid on boosting of Investments.

Amongst notable measures, government has proposed provision of Rs. 70,000 Crore for capitalisation of public sector Banks. A proposal is also being considered to increase minimum public shareholdings from 25% to 35%. For cultivating the start-up culture, government stated that Start-ups will not be subject to any scrutiny from Income Tax department on valuations and fund raising.

RBI maintained the accommodative stance of monetary policy and slashed the repo rate by 35 basis points from 5.75% to 5.40% in July 2019.

Retail inflation calculated on the basis of Consumer Price Index (CPI), dropped to 3.15 per cent in July in spite of higher prices of food compared to 3.18% in June 2019. Industrial production growth slipped to 4.3 per cent in July, mainly on account of poor show by the manufacturing sector. Rupee lost by 0.67 per cent and closed at 69.41 Rupee per USD.

There was severe selling pressure on Indian equities in July due to uncertainties over swing of budget proposals and a further slowdown in the economy. Bears dominated the markets as Sensex went down 4.86% and the Nifty slid 5.69% in July. 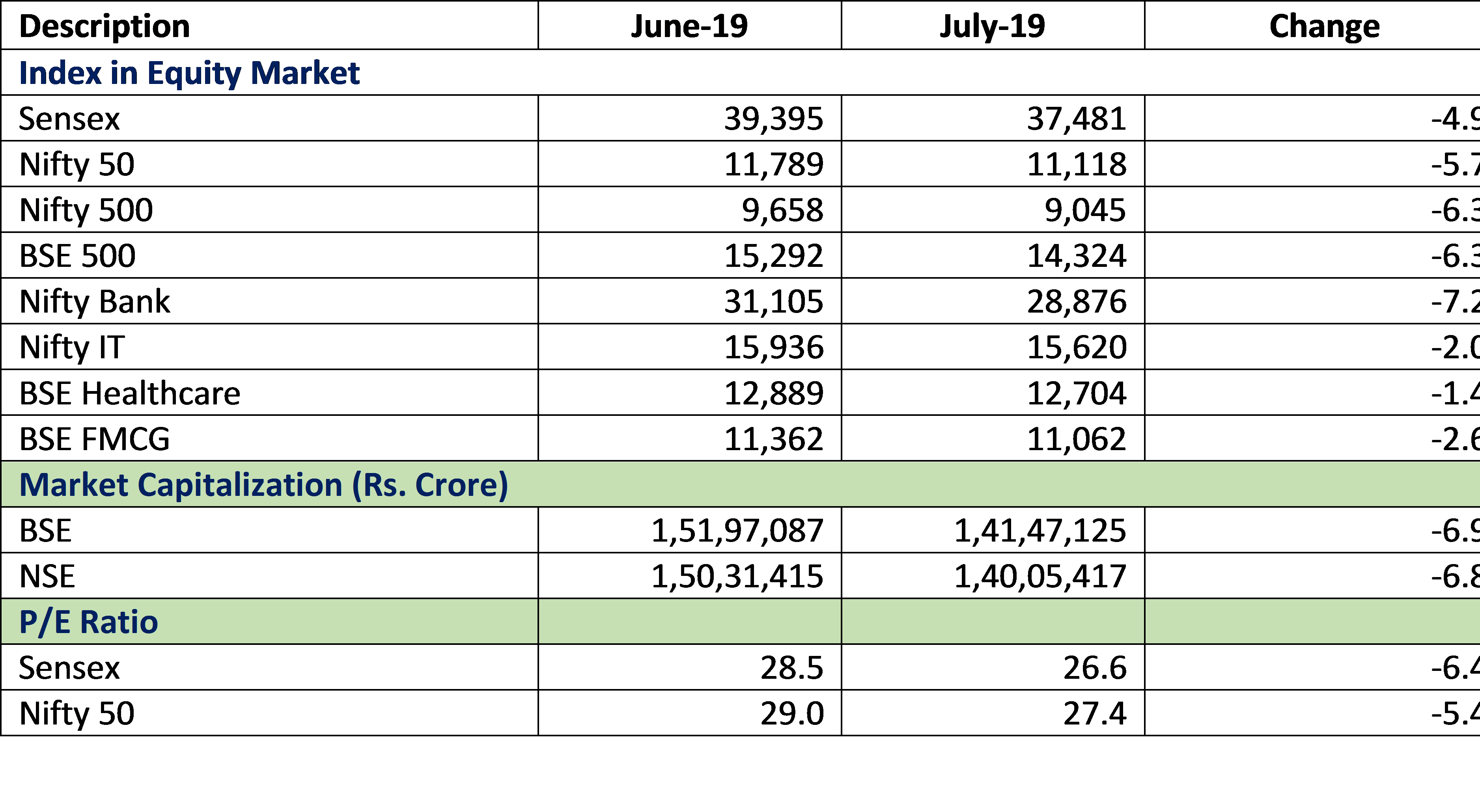 Signs of a further slowdown in the global economy became more prominent during July 2019. Trade tensions between the largest two economies in the world intensified with the US announcing of 10 per cent tariff on US$300 billion of goods from China from September 1. As per the advanced estimates by the Bureau of Economic Analysis, the US economy grew at an annualised rate of 2.1 per cent quarter-on-quarter (Q-o-Q) during the second quarter of 2019. The growth rate in the previous quarter was 3.1 per cent. On the other hand, impact of intensifying Brexit-related uncertainties has been affecting the UK’s economy. The Q-o-Q growth rate of GDP increased to 0.5 per cent in the first quarter of 2019 and it is expected to have a flat trend in the second quarter.

India has experienced mild slowdown in growth rate during the first quarter of 2019. Retail inflation, measured by y-o-y change in the CPI, edged up to 3.2 per cent in June from 3.0 per cent in April-May. The Chinese economy has been hit by the ongoing trade war with the US. China’s GDP grew at a pace of 6.2 per cent Y-o-Y during the second quarter of 2019 which is the weakest growth rate in at least 27 years. Brazilian economy continued to flounder in the second quarter of 2019, after GDP contracted by 0.2 per cent (Q-o-Q) for the first time since the 2015–2016 recession in the first quarter.

Russia’s growth performance and prospects have weakened since in recent quarters due to factors like fall in oil prices, geopolitical tensions, raised uncertainty which dampened domestic and foreign private investment.

Bond markets in the emerging markets fared well on the prospect of lower US rates along with bond markets in selected developed nations. The price of their government bonds increased which was reflected in the falling of yield. Federal Reserve lowered the target range for the federal funds rate to 2.0 – 2.25 per cent during its July meeting. The 10-year US Treasury yield at the end of July 2019 remained flat compared to its previous month’s value. Yield of the German Bund fell by 11 bps. The UK 10-year yield fell by about 22 bps, whereas yield of Japan’s 10-year government bond remained flat.

Among the emerging markets bond yields fell substantially for Indian 10-year bonds by 51 bps. Yields of 10-year government bonds fell by 22 bps in Brazil and by 11 bps in Russia.