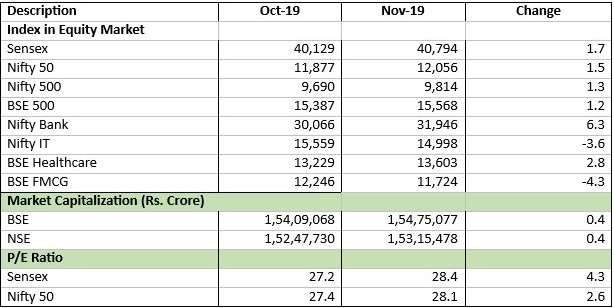 During the month of November 2019, the sectoral indices witnessed mixed trends. The telecom sector recorded gains in expectation of favourable government policies. Among BSE indices, S&P BSE Telecom increased by 23.45 per cent, followed by S&P BSE Banker (6.68 per cent), S&P BSE Finance (5.81 per cent). On the other hand, S&P BSE Capital Goods decreased by 7.64 per cent and S&P BSE Consumer Durables decreased by 7.51 per cent during the period. 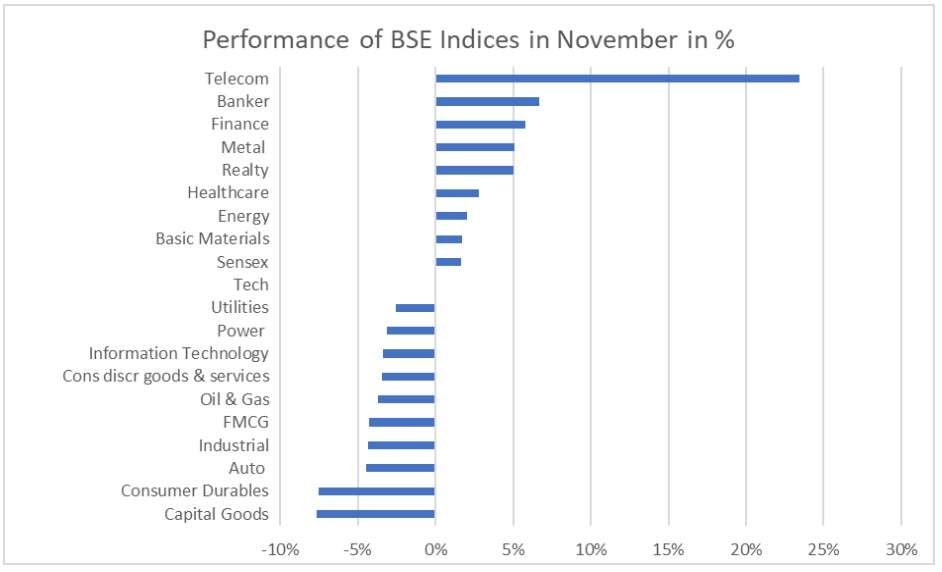 Patanjali Ayurved has taken over soya food brand Ruchi Soya for Rs.4350 Crore through an insolvency process. The acquisition was completed by infusing equity of Rs.1100 crore and debt of Rs.3250 crore.  This acquisition will help Patanjali acquire other soya bean oil brands as well as edible oil plants. Insolvency proceedings were initiated against Ruchi Soya in December 2017 on application of DBS Bank and Standard Chartered Bank.

US asset manager T Rowe Price led a financing round through which the digital payments company Paytm has raised $1 billion. Existing investors SoftBank and Ant Financial have also infused $200 million and $400 million respectively in the company. Hence taking the total amount raised to $3.5 billion. SoftBank’s investment came with a condition for Paytm to go public in five years from the time of completion of the transaction. If the condition is not met, SoftBank can sell its stake to a rival company. The valuation of Paytm has now reached close to $16 billion.

Global economic growth is slowing down due to the ongoing geopolitical tensions, uncertainty surrounding the trade deal between the U.S. and China, which has disrupted supply chains, reduced investment, rattled financial markets, etc.

The developed markets continued to post better returns, compared to those of the BRICS nations. There was fall in the closing values of various indices in November 2019 except UK FTSE 100 Index which increased by 2.21% in November as compared to the previous month. Performance of various stock indices is given as under.

Central Banks of many economies have reduced the policy rate during 2019.  Bond Yields for the developed nations are on a moderate upward trajectory from September 2019.