The first advance estimates (FAE) released by the National Statistical Office (NSO) on January 7, 2020 placed India’s real gross domestic product (GDP) growth for 2019-20 at 5.0 per cent. In its January 31 release, the NSO revised real GDP growth for 2018-19 to 6.1 per cent from 6.8 per cent given in the provisional estimates of May 2019. Turning to more recent indicators, both production and imports of capital goods – two key pointers of investment activity – continued to contract in November/December, though at a moderate pace compared with the previous month.

During the month of January 2020, the sectoral indices witnessed mixed trends. Among BSE indices, S&P BSE Realty noted gains owing to the expectations from Union Budget 2020 to bring in reforms & initiatives to ease the liquidity crisis. S&P BSE Realty increased by 10.75 per cent, followed by S&P BSE Telecom (5.6 per cent), S&P BSE Consumer Durables (4.5 per cent), S&P BSE Healthcare (3.93 per cent). On the other hand, S&P BSE Metal decreased due to the fears about disruptions to the steel supply chain because of the ongoing coronavirus outbreak in China. S&P BSE Metal went down by 8.96 per cent, followed by S&P BSE Energy (7.39 per cent), S&P BSE Oil & Gas (5.57 per cent) during the period. 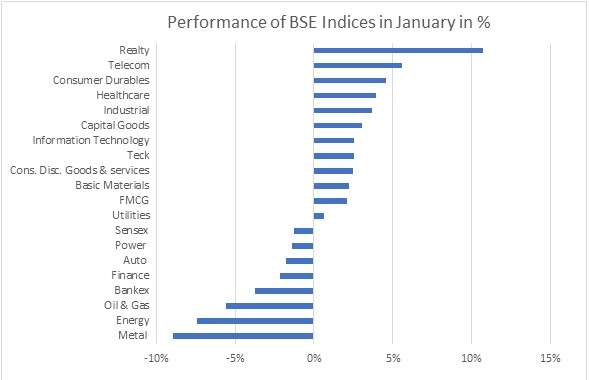 e) Trends in Substantial Acquisition of Shares and Takeovers

The IMF has revised the global economic growth downwards from 3.4 per cent to 3.3 per cent.  IMF attributed its downward revision of global economic growth to India’s slowdown in growth. However, IMF noted that India would recover in the next fiscal year owing to some of the positive measures taken by the Government. IMF has downward revised US growth to 2 per cent, down by 0.1 per cent compared to its October 2019 projection. Also, the fast spreading coronavirus outbreak has dragged down the markets world-wide, majorly in China.  This is dragging down the global growth prospects too for 2020.

However, the year 2020 has started off on a positive note and was gaining during mid-January. The trade war tensions between US and China eased with both the countries signing the first phase of trade deal on January 15, 2020. Another major event in January 2020 was the exit of UK from the European Union.

The Nasdaq Composite gained about 2 per cent while Dow Jones Industrial Average Index declined by about 1 per cent. Amongst other developed markets, Hong Kong’s Hang Seng index recorded the least return with a decline of 6.7 per cent, Taiwan’s Taiex by 4.2 per cent UK’s FTSE by 3.4 per cent. Amongst the major emerging economies, Russian Traded Index declined by 3.6 per cent, China’s Shanghai Stock Exchange Composite Index by 2.4 per cent and Brazil Bovespa by 1.63 per cent. India’s Nifty and Sensex index posted a negative return of 1.7 per cent and 1.3 per cent respectively. 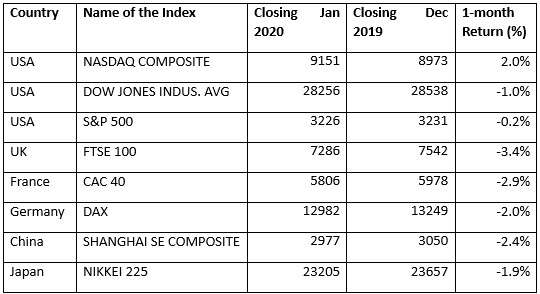