2019 saw India’s GDP growth slowed down in light of IL&FS crisis and subdued global economy. Reserve Bank of India revised GDP growth to 5% for 2019-20 in its December policy from 6.1% in its October policy. The impact on capital markets was mixed as while the IPO activity slowed down in 2019, the foreign portfolio investors invested in India in a big way. Following is a brief update.

Fund raising through Initial Public Offer (IPO) dropped in year 2019 with 16 companies raising around Rs. 12,365 Crore as against 24 companies raising Rs. 30,959 Crore through IPOs in 2018. This can be attributed to weak financial weather because of which investors preferred only quality stocks and backed IPOs of only high-quality companies. However recent increase in draft IPO filings suggest that companies are optimistic of a more favourable 2020.

Foreign Institutional Investors (FIIs) invested more than 1 Lakh Crore in Indian stocks in 2019 (against a net outflow in 2018). This shows that FIIs are bullish for Indian equities and looking for long term growth in Indian market. Introduction of an additional surcharge on foreign portfolio investors had led to decrease in steady flow of foreign money into India in July and August, however, the surcharge was later withdrawn in September.

During December 2019, there were two main board public issues of Ujjivan Small Finance Bank Ltd.     (mobilising Rs.746 crore) and Prince Pipes and Fittings Ltd. (mobilising Rs.500 Crore) mobilising total Rs.1246 Crore as compared to one main board issue of CSB Bank Ltd. in November 2019. Ujjival small finance bank Ltd. is a microfinance based NBFC that turned in small finance bank after approval of RBI in 2017. Prince Pipes and fittings is a leading manufacturer of polymer pipes and fittings and competes with players like Supreme industries and Astral polytechnik. 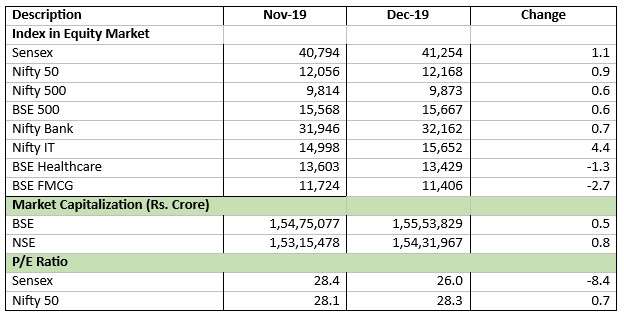 During the month of December 2019, the sectoral indices witnessed mixed trends. Among BSE indices, S&P BSE Metal Index noted gains due to increase in demand of metals like zinc, iron ore, steel, etc. and as a result the metal prices saw upward revision leading to expectation of higher margins. S&P BSE Metal went up by 6.64 per cent followed by S&P BSE Realty (5.26 per cent). On the other hand, S&P BSE FMCG and S&P BSE Oil & Gas both decreased by 2.71 per cent during the period. 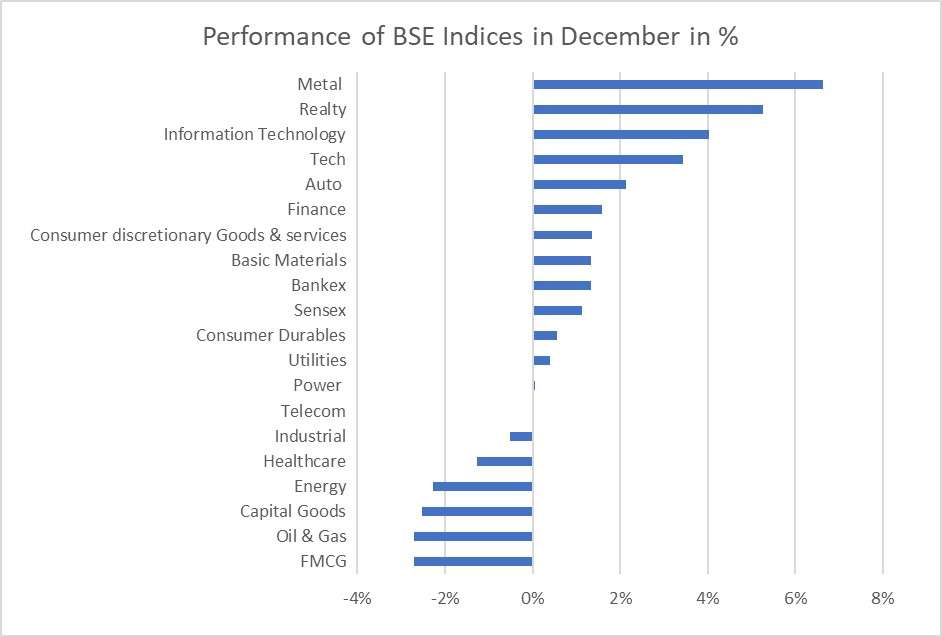 e) Trends in Substantial Acquisition of Shares and Takeovers:

Eris Lifesciences Ltd., acquired trademark ‘Zomelis’ and its associated trademarks from Novartis AG, based at Basel Switzerland for Indian pharmaceuticals market with effect from 10th December 2019 for a consideration of $13 Million. This trademark has been used for marketing an oral anti-diabetic drug promoted in India. The acquisition of this trademark is expected to provide a head-start to Eris visà-vis other branded generic players after the scheduled expiry of the related patent in December 2019 in the Indian Market.

Adani Electricity Mumbai Limited (AEML) and a subsidiary of Qatar Investment Authority (QIA) have signed definitive agreements for the sale of a 25.1% stake in AEML to QIA. The total QIA investment in AEML will be approximately INR 3,200 Crore ($450 million). AEML has significant market share in Mumbai and has two 250 MW coal based power plants. This transaction will deleverage balance sheet of AEML and provide equity for further capex.

Lenskart, Indian eyewear retailer, has raised US$275 million from SoftBank Vision Fund, a subsidiary of SoftBank. Funds will be used for expanding the business. The all-time raise of Lenskart has increased to $456 million after SoftBank’s investment and its valuation is now over $1.5 billion.

The global economy is slated to grow at its slowest pace in a decade in 2019 – largely as a result of US-China trade war dampening business confidence, investment, manufacturing and trade worldwide. Though in a positive development USA and China have reached a Phase One trade deal whereby USA will delay indefinitely the new tariffs that were set to take effect in December on Chinese imports and reduce the existing tariffs.

The World Bank expects global growth rate to slow down to 2.5 per cent in 2019, while IMF has forecasted it to be 3.0 per cent, reflecting weaker-than-expected trade and investment during 2019. However in the month of December, global equity markets rallied on the back of optimism over global trade outlook and accommodative monetary policy.

Global bonds sold off in December 2019 as investors risk appetite increased on signs of a potential easing of trade tensions between the US and China as well as an agreement between the UK government and European Union over Brexit. The yields on the most of the government bonds increased.