Repo rate is the interest rate which the Reserve Bank of India charges for loans to other banks for short term. Changing Repo rate is one of the three instruments of monetary policy available with the Central bank along with open market operations and scheduled bank reserves (SLR – Statutory liquidity Ratio and CRR – Cash Reserve Ratio) requirement. The lower repo rate means cheaper borrowed funds for banks. Repo rate is reduced in the expectation that the banks will reduce short term and medium term interest rates on the consumer loans. Reduced bank rate increases monetary base and money supply in the economy as it leads to borrowers borrowing more of cheaper funds and spending more money.

Reducing repo rate is a good measure to kick start the economy. However, it has brought limited success over last few months. The bank loan rates have not come down proportionally because of inadequate monetary transmission. Monetary transmission means the process by which the monetary policy decisions influence interest rates, demand and money supply to affect economic performance. To address this RBI has made it mandatory for banks to link lending rate to external benchmarks from 1st October 2019. The benchmarking can be done with Repo rate, GOI (Government of India) 3 month Treasury bill yield published by FBIL (Financial Benchmarks India Pvt. Ltd.) or GOI 6 month Treasury bill yield published by FBIL or any other benchmark interest rate published by FBIL. Under the external benchmarking system the banks will be still free to decide the spread on external benchmark.

During October 2019, the amount raised through private placement of equity (i.e. preferential allotment and QIP route) stood at Rs. 621 crore comparing with Rs. 15,789 crore in September 2019. 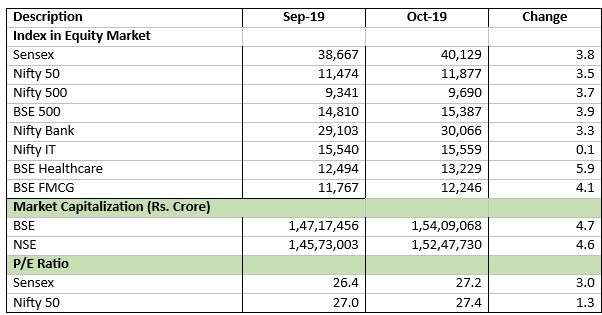 During the month of October 2019, most of the sectoral indices witnessed upward trends. Among BSE indices, S&P BSE Auto increased by 13 per cent, followed by S&P BSE Energy (8.9 per cent), S&P BSE Oil & Gas (7.46 per cent). Auto sector surged on expectation of strong sales during the festival season. On the other hand, S&P BSE Tech decreased by 2.5 per cent and S&P BSE Telecom decreased by 6.6 per cent during the period. 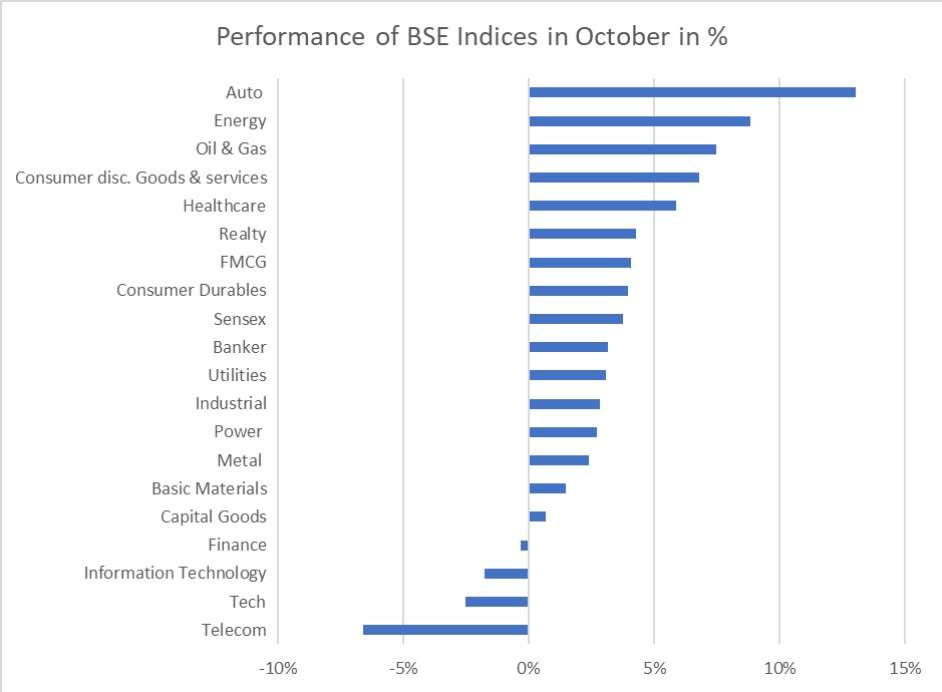 French Energy giant Total SA has acquired 37.4% stake in city gas distributor Adani Gas Ltd. for around Rs. 5700 Crore. Both Adani family and Total will hold 37.4% stake each in Adani Gas while remaining 25.2% will be with public shareholders. Both partners plan to make significant investments in LNG, gas distribution and fuel retail infrastructure in next 10 years and target to cater to 7.5% of India’s population across 15 states. This deal will provide Total with firm demand for gas and expertise in Indian retail market. Total is another major oil player’s entry into Indian Energy market after Shell, BP and Saudi Aramco. Saudi Aramco entered India in August 2019 after acquiring 20% stake in Reliance Industries Ltd.’s Oil to Chemical business.

The global economy is slated to grow at its slowest pace in a decade in 2019 – largely as a result of US-China trade war dampening business confidence, investment, manufacturing and trade worldwide. The World Bank expects global growth rate to slow down to 2.6 per cent in 2019, while IMF has forecasted it to be 3.0 per cent, reflecting weaker-than-expected trade and investment since the start of the year. Going forward in 2020 as well the global growth is expected to remain lacklustre and possibly lower than IMF’s global growth forecast of 3.4 per cent.

Global equity markets continued its growth momentum in October 2019 buoyed by Federal Reserve’s move to lower the federal funds rate by another 0.25 percentage points. In the USA, the Dow Jones Industrial Average index and S&P500 index rose by 0.5 per cent and 2 per cent respectively in October 2019, while technology heavyweight Nasdaq composite index rose by 3.7 per cent. The European equity markets grew by 0.7 per cent, following 3.7 per cent rise in the previous month. Amongst other developed markets, Japan’s Nikkei Index rose by 5.4 per cent followed by Germany’s DAX index (3.5 per cent), Hong Kong’s Hang Seng index (3.1 per cent) and France’s CAC40 index (0.9 per cent). On the contrary, the UK’s FTSE100 index lost 2.2 per cent on the concerns over brexit uncertainty.  Brazil’s Ibovespa Index went up 2.4 percent and China’s Shanghai composite Index went up 0.8 percent during the period.