Hostile takeovers and case of L&T Infotech and Mindtree 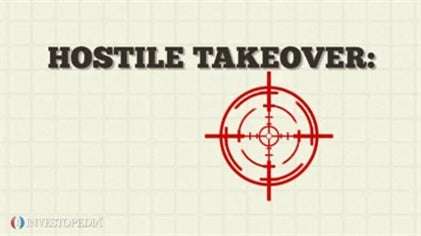 L&T Infotech’s takeover of Mindtree Ltd. can be considered one of the first hostile takeover in Indian History. L&T acquired 21% stake in Mindtree from an investor and eventually took complete control over the software company’s board and management by acquiring more than 60% stake in it.

We will also discuss different strategies like buyback of shares, poison pill strategy or white knight strategy which can be used to defend against hostile takeover.

Mergers & Acquisitions generally take place by mutual agreement i.e. both companies to the transactions agree to the merger/acquisition after evaluation of the risks and returns of the transaction and considering the strategic implications. In case of a hostile takeover there is disagreement on part of the target company. Hostile takeover began as the fourth merger wave in 1980s. These bids are usually hostile i.e. target company’s management does not approve of the takeover by the acquiring company. In spite of that, the bidder continues to pursue the acquisition. The bidder initiates a hostile takeover through a tender offer to purchase the target company’s stock at some price above market price or else it may try acquiring a majority stake of the company in the open market.

Mindtree Ltd. is a Bangalore based Software Services company. It offers application development and maintenance, infrastructure management services, independent testing, package implementation, consulting and intellectual property products-related solutions. It had around 340 active clients and 43 offices in over 17 countries (as of July 2018).

Larsen & Toubro Infotech Limited (LTI) is a Mumbai based global IT solutions and services company. It was incorporated in 1997 and is a subsidiary of Larsen & Toubro Limited. It provides services to the clients by leveraging Business-to-IT Connect. Company has around 23 software development centers and 44 sales offices across the world.

As per the statements given by L&T’s top management personnel, it has a software services business under L&T Infotech and this acquisition was aimed at delivering best IT services to its clients worldwide which could take its technology portfolio among the top tier IT companies of the country. They were also confident that company’s current resources were enough to fund the takeover.

Rationale of promoters of Mindtree

All the promoters of Mindtree opposed the takeover including Mr. Subroto Bagchi who resigned from a government panel to help the management tackle the issue of hostile takeover by L&T. As per them, there was no strategic advantage of this takeover and it was a threat to Mindtree’s unique organization. Mindtree chairman and cofounder Krishnakumar Natarajan wrote a letter to L&T board to warn against a hostile takeover wherein he expressed his shock regarding the attempts of a hostile takeover. He also mentioned that management does not want to be part of an organization that is culturally very different from Mindtree and that a merger between the two organizations will not be fruitful for any of the two. According to Mr. Subroto Bagchi, Mindtree had not been designed as an “asset” to be bought & sold. Rather It is a national resource and It had a unique culture that humanizes the idea of business.

L&T responded to that by stating that if the deal happens, the technology companies of L&T will be kept separate. Mindtree will be independently listed post takeover and it will benefit due to large client base increasing shareholders’ returns. Market capitalization of L&T had grown 2.5x in last 3 years and its margins were around 16% whereas Mindtree’s growth was under pressure and so were its operating margins.

The 21% stake of Siddhartha was pledged by him to various Banks and Financial Institutions in several tranches. To release these shares Coff­ee Day Group entity Tanglin Retail Developments Pvt. Ltd. issued non-convertible debentures of Rs.3000 Crore with a tenor of 1 year and 1 month. This arrangement was done to make the share transfer easier i.e. to avoid taking NOC from several lenders. The stake was sold on 30th April 2019 by VG Siddhartha to L&T for Rs.3211 Crore. Siddhartha sold his Mindtree stake to pay off his debts of Coffee Day Enterprises (CDE – holding firm for CCD) and other ventures. Total debt of CDE was Rs.6550 crores before the sale of its Mindtree stake. The company had raised around Rs.1000 crore through a public issue in October 2015. It had a debt-to-equity ratio of 1.7 times in FY16 which shot up to 2.6 times in FY19.

As per SEBI’s Substantial Acquisition of Shares & Takeovers (SAST) regulations 2011, whenever a company is trying to acquire another company, it has to make an open offer to public when the shareholding of acquirer increases to more than 25%.  Further according to the provisions, whether or not one holds shares or voting rights, one cannot take control of the company unless an open offer is made to public to acquire those shares.

L&T made an open offer without owning 25% shares in Mindtree. JN Gupta, founder, Stakeholder Empowerment Services (SES) and a former director at SEBI in a said an open offer gets triggered only if an order placed with the broker crosses the threshold of 25 per cent voting rights, which L&T did not have at the time of announcement of the offer. Mindtree also wrote to SEBI seeking clarification on whether the offer was “legally valid”.

While the approval of SEBI to L&T for purchase of 31% stake in Mindtree was taking time, L&T acquired more shares from the open market and its stake reached to 28.9%. Other investors that sold shares of Mindtree to L&T included Rekha Shah (wife of Enam Group co-founder Nemish Shah), White Oak Capital Management (founded by former Goldman Sachs executive Prashant Khemka)

After the launch of open offer by L&T, Mindtree promoters gave up the plan to buy back shares and formed a committee of independent directors, led by Apurva Purohit (Independent Director) to evaluate the offer of L&T keeping in mind the interest of shareholders of Mindtree. While the promoters of Mindtree were of the opinion that the offer price, Rs.980, was undervalued and much lower than Rs.1183 (52-week-high), the committee came to conclusion that offer price was fair and reasonable.

Nalanda Capital sold its whole stake worth Rs.1707.46 crores to L&T in the open offer for shareholders of Mindtree. Arohi Asset Management too, sold its 1.22 % stake held in the company via Ontario Teachers’ Pension Plan in the open offer to L&T.  L&T got over 21% stake through open offer so far and increased its stake in Mindtree to 51%. 73.9% of public shareholders sold their shares to L&T. Other institutional shareholders, Amansa Private Holdings (2.77%) and UTI Asset Management Co. Ltd (2.97%) sold their stake to L&T in open offer.

L&T completed buying the 31% additional stake it targeted to acquire in Mindtree for Rs.4988.82 crores through the open offer. The offer to purchase 50.9 million shares of Mindtree from public shareholders was subscribed 1.2 times on 26th June, 2019 and it closed on June 28, 2019. Thus the 60% stake in Mindtree gave L&T complete control over the software company’s board and management. On 3rd July 2019, L&T received promoter status in Mindtree as company increased its stake to 60.06%.
Krishnakumar Natarajan (Executive Chairman), N S Parthasarathy (Executive Vice Chairman and Chief Operating Officer) and Rostow Ravanan (CEO and Managing Director) resigned as members of the Board of Directors of Mindtree Ltd and as employees of the company. They acted as board members and employees till 17 July 2019 in line with their employment contracts.

Promoters Mr. Krishnakumar Natarajan, Mr. Subroto Bagchi, Mr. NS Parthasarathy and Mr. Rostow Ravanan together hold 13.32% stake in the company. 60% was acquired by L&T. Rest is held by domestic mutual funds and foreign portfolio investors. L&T eventually wants to buy around 66% shares of Mindtree that will cost the company around Rs.10800 Crore. The Competition Commission of India (CCI) had approved L&T’s takeover proposal in the month of April 2019.

It has probably happened for the first time in India that a company wanted to buy back its shares to avoid its takeover by another company. News of buyback when such a takeover is being considered goes on to show the disharmony between management and stakeholders. When a buy back is announced by target company, the cost of acquiring goes up for the acquirer.

The maximum amount of buyback of shares as per the Companies Act is 10% of company’s capital and free reserves without special resolution. This maximum limit can be 25% when a special resolution is passed in the General Meeting. Apart from this, the Debt to Equity ratio after buy back cannot be more than 2:1.  The price at which the buyback can be done is the average of six months.

VG Siddhartha could have offered his shares for buyback to get funds from it provided 15% of the offer of buyback be reserved for retail shareholders and two-thirds of shareholders pass the buyback. However he decided to sell off his stake to L&T instead of going for buy back.

Some industry experts criticized the governance of Mindtree stating that before announcing buy back it did not take its strategic investor Mr. VG Siddhartha into confidence who has been with the company since the beginning.

Flip-in poison pill strategy: This strategy involves giving shareholders the right to buy additional shares at a discount if the acquirer buys over a certain percentage. This decreases the value of the shares purchased by the acquiring company. Company gives this right to purchase to the shareholders before finalization of takeover.

Flip-over poison pill strategy: The right to purchase the shares of the acquirer is given to shareholders of target company at a deeply discounted price. This is only possible when the bye laws of acquirer company allows it and is thus a less frequently seen method. Example, target company shareholder is given the right to buy the shares of acquirer at 2 for 1 ratio. This dilutes the equity in the acquiring company. The acquirer may not go ahead with such acquisition as he may see dilution of value.

Mindtree promoters tried to seek a white knight by asking PE firms like Baring PE Asia, Chrys Capital, KKR etc. to purchase its stake from VG Siddhartha who eventually sold its 20.32% stake to L&T.  However, none of the PE firms agreed to play the white knight as they too wanted a controlling stake in the company just like L&T.